Hi Walker and others

I did post this question (in a slightly different form) before.
I though the job (and my question) had gone away, but it has now come back and I was hoping for some direction or advice…?

I have a client who has some positives on Pictorico which were printed for her by another printer. She is now wanting me to print new (larger) positives, with similar/same density values to her existing positives. She will be using the positives to make photogravues.

She has supplied me with the existing positives as well as the image files used. She has also sent me a screenshot of the settings that the previous printer used. See attached below.

Ok can’t figure out how to load a pic, will try a separate post to load image…

What would be the closest starting pointing in terms of profile for my 3800 with Pro inks? 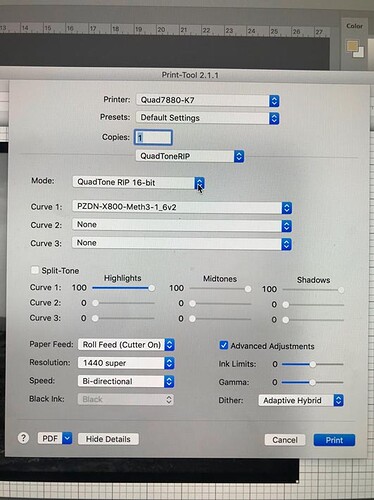 If you could get a 256 step transparency target from the original and print the same target from your setup (and if you have a densitometer) you can measure the target values and put into Target Measurements sheet, measure your values and put into Measurements sheet, (these can be density from a densitometer) and then put your PiezoDN curve in there and it will be calibrated to match her densities.

Just to update this thread: Paul sent me some great targets yesterday and I was able to measure and do luminance matches with PPEv2 (a hidden but important feature of PPEv2). Luminance can vary from head to head and printer to printer (or channel to channel!). So this is why PPEv2 is important. Also, because he has so many prints out of the P400 with slightly darker-than-linear shadows and because the P9000 is generally slightly light, it’s useful to do a luminance match calibration so he does …

Can you hazard a guess as to which of the existing 3800 Pro DN curves would be the best staring place for me to try and get in the same ballpark as the original printer using ‘PZDN-X800-Meth3-1_6v2 on a Quad7880-K7’?

I also notice that the original printer was printing at 1440? I am guessing that might be a deliberate way of reducing the overall density? Am I right in saying that printing at a lower dpi will reduce density ?