Then I print the 256 patch test chart for Colorport using QTR using the K7SpecEd-UltraHDMK-Master curve (only the one available for the 3880 printer and not for the new P800) and then re-linearizing two more times. I get L * 14.08 (that is a very poor value!)

Thanks for the precious help you will give me.

I’m not Walker but …

You don’t mention having tried the the curve provided for your exact combination of ink, printer, and paper:
Curves HD > P800-K6 > K6-SpecEd-UHD-HahnPhoRagBrW.quad

Not quite exact, actually, since you have K7 rather than K6 installed. The only difference is that K6 does not use Shade 7. But, unless I am mistaken, all curves built specifically for the HD-PK and UHD-MK inks are of the K6 configuration.

Be sure you are using the Curves-HD folder, not the Curves folder.

The QTR ink calibration mode does not actually tell you what the maximum obtainable black value is because there is no overlap of inks used – each channel is “pure” or independent of the others. In actual printing there is almost always overlap of 2 or more ink channels. Since you printed at 100%, I wonder which step of the K channel is the first that reached maximum black. It is usually lower than the 100% step.

Thanks, Keith, for your prompt reply and I’ll answer you now:

From what you tell me it is the only and best starting master curve for me. It’s really like this?

Can you send this master curve to me ([email protected])?

As you know I use the Special Edition K7 and I am aware that black (0 RGB) obtained with PPEv2 is mainly composed of shade 1 (UltraHD MK), but also to a lesser extent shade 2 (Carbon 100%).

That said, I wonder how InkJetMall or Cone Edition manage to get a Dmax 1.85.
I would like it too

I would like to know which parameters I have to change in PPEv2 ?
(since it is the only tool available).

Dear Corrado, the P2/K6/K7 curves have a slightly different structure with more overlaps in the darks to accommodate the full carbon color of the black in without making the shadows go too warm.

But speced can afford to have only 100% UHD in the shadows. All you have to do is set the last number of the K channel to the same value as the Pro curves and zero out the last number on all the other channels.

I’ve done that on this master curve:

Then simply linearize per normal with PPEv2.

Hi Walker,
Thanks for your answer, which for me is not very clear (I am a photographer and not a technician) and therefore does not allow me to be operational to obtain a Dmax 1,85.

I come to the point: I would like you to have an excellent Master curve for:

I ask you this because other printers (R3000, 3880) have specific curves for this excellent ink set and for this paper. I am surprised that your excellent work has not continued for the P800 printer.

I hope you can help me and all the other printers that are in my condition.

The Piezography Manual : Getting Started

Piezography is pretty simple to get working. It just requires you to follow certain steps to convert your printer. Use this page to get started!

But in general, just start with the curve above and linearize with PPEv2. It will get you there.

I’ve read and re-read this thread a few times now, and it looks to me like there is some confusion regarding the meaning of the term Master in the context of Piezography curves.

Corrado seems to be thinking of Master as being synonymous with Final which it is not. In fact, the Master curves provided in some cases for some printers are intended to be used as starting curves for custom linearization when there is no curve available for the specific combination of printer/ink/paper being used.

The curve that I directed Corrado to above, on the other hand, is exactly what he has asked for.
Curves HD > P800-K6 > K6-SpecEd-UHD-HahnPhoRagBrW.quad
It is not labeled Master because it is an iteration or 2 beyond the Master.

If you want to try to squeeze higher Dmax from it you could try using the New Curve Ink Limiting function of PPEv2 to increase ink levels at the 0 point by setting the ink % above 100% slightly. If you try this I would be very cautious because too much will oversaturate the paper and may bleed into the printer. 105% might be a good place to start. Overinking is also likely to result in a decrease of Dmax rather than an increase.

Or try the Master curve that Walker provided above, but understand that as a Master it has not been linearized for your paper – you will need to do that. It may not have been made for the P800 which means you may need to tweak the ink limits further as well.

I don’t mean to be stepping on anyone’s toes with these comments, so I hope it’s not taken that way. My interpretation of the thread meaning could also be mistaken and I apologize if that is the case.

Dear @ccolombo related to what @jkschreiber just said, the Master curve is the one built to linearize. That is why I modified it to your required specs so it’s ready for you. Curves further down the line are not as easily linearized if they have been modified like this or have been added to in the way Keith described (with ink limits).

I thank you for the precious time you gave me.

But Piezography / InkJetMall ultimately DOES NOT give me a good master curve for the K7 ULTRA HD set (which develops 7 inks) that reaches the much praised Dmax 1,85.

Imagine joining the group of numerous photographers / printers who, up until now (and even future ones) have followed the excellent and authoritative instructions of Piezography / InkJetMall to obtain fantastic prints.

Well, at the end of this expensive path you would discover that Piezography / InkJetMall DOES NOT provide you with a specific master curve for using the 7 inks, but only a master curve that uses 6 inks.

The shadow 7 remains unused - even if purchased - and therefore the benefit of the seventh ink is lost.

I wonder: would you expect to get a good master curve for the K7 ULTRA HD set from Piezography / InkJetMall that reaches Dmax 1.85?

With a cordial greeting. Corrado.

It’s on the list to publish K7 but frankly the newer printers run just as well at K6/P2 and this is the more popular option IMO.

I thank you for the detailed answers you gave me. I apologize if the translation from Italian to English is not adequate.

I’ll give you two things:

That said, I looked in the Curves-HD folder for the curve you indicated to me: P800-K6> K6 SpecEd-UHD-HahnPhoRagBrW.quad

I ask you what I should do to make sure you download the complete file from Piezography?

Thank you and a cordial greeting. Corrado. 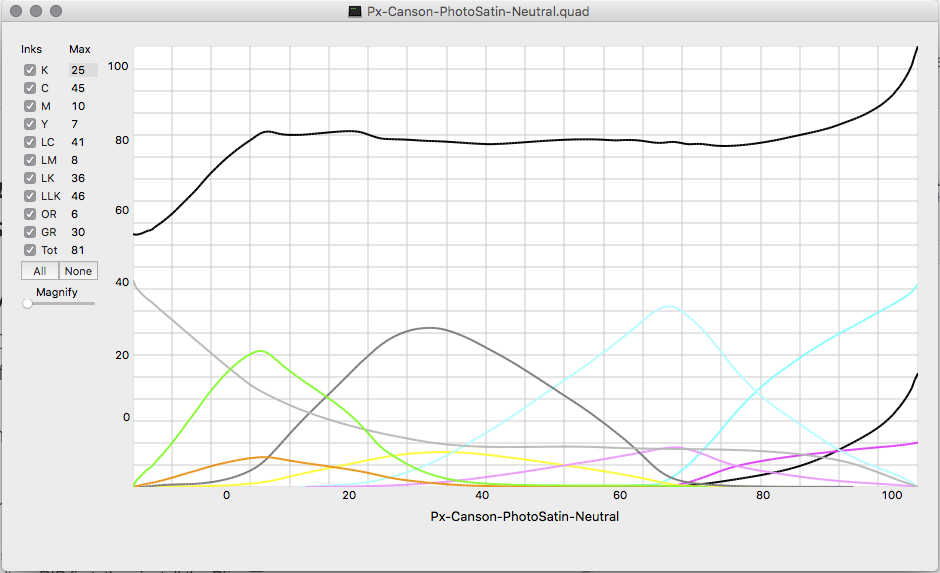 In the Piezography Community Edition, you find The Piezography Manual, free Curves for printing with K6, P2, & K7 and Pro ink, and other useful Tools.

Shade 7 is for the highlights. The eye is much more perceptive to changes in shadow density, which is why K7 really doesn’t offer much advantage, especially since PPE tool, which wasn’t around when K7 was the standard. If you want to use it, go for it, but don’t be ruled by principal. Do a test linearizing a K6 and K7 curve, shuffle them around so you evaluate them without knowing which is which— I predict you will have to reallllly look hard to discern between the two.