Hello everyone! And Happy New Year!

I know that the strongly recommended product for making PiezoDN negatives is ultra premium Picotorico (which is what I use). Given the recent dramatic increase in Pt. and paritcularly Pd. prices I am always on the lookout to save a few bucks. I have been reading that Fixxons can hold a lot of ink (which is one of the reasons the ultra premium Pictorico is recommended / supported). It is dramatically less expensive then Pictorico. In doing a little research it seems as if Fixxons has what they call a “negative film for Non-silver print processes” (and specifically list Pt. / Pd. among others). I also print in gum over Pd. using multiple negatives so saving here is important.

I am wondering if anyone at Cone or artists reading this post have tried this film with PiezoDN inks. Here is a link: https://www.fixxons.com/4Negative/main.html

I suspect you will be disappointed. Back in October of 2018 when we started beta-testing Walker’s K8-dye inkset, he asked the testers to try it out on films other than Pictorico Ultra. I contacted Fixxons to get a sample and spoke directly with Jesus Ramos who is the Operations Manager and told him exactly what I would be using it for. I remember the website being a bit unclear about the differences of various products, but I don’t remember there being anything specifically identified as being a film for alt-process negatives such as what is in your link.

The sample pack I received is labeled Waterproof Screen Positive Film. Interestingly, the package label says the thickness is 4 mil but the accompanying info sheet says 5 mil. It seems to work well with the K8-dyes, but not so much with Piezo K7/K6 which puts down a significantly higher ink-load than the film can hold.

I can’t find the tests I ran with this in late 2018, but I just ran them again today and my memory is correct.

Maybe the film in your link really is different, though my guess is that it will need to have about double the ink-load capacity to work with K6/K7 or Pro PiezoDN inks.

Maybe I’ll shoot Mr Ramos a message to see about getting a sample of this film.

Thanks for the background.

I just received my sample pack after a nice email exchange with Jesus Ramos. The sample pack is not marked as to which product they sent me. What tests did you run so I can replicate them here with this sample film? 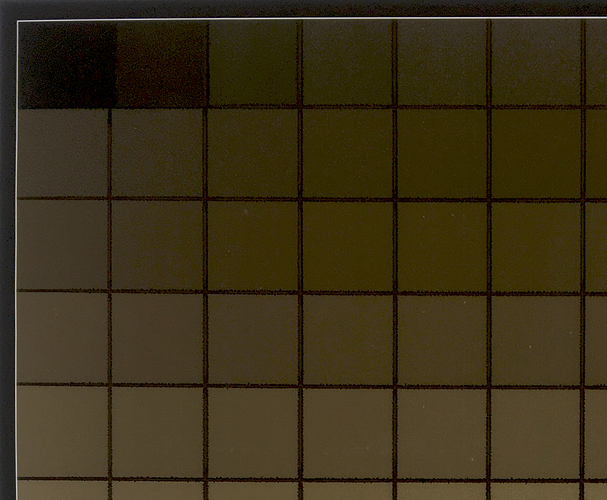 The bleeding is pretty obvious in the detail.

I think these are two different products. What I requested was the Fixxons “Microjet waterproof negative film for Non-silver print processes film” ( link: https://www.fixxons.com/4Negative/main.html ). This is not their waterproof positive for silk screen print.

I printed the 31 step chart with my master curve (as I’ve been meaning to make some soft proofing profiles). Here are the results. (Sorry for the less than optimum iPhone snaps. Ignore the yellow color cast in the third photo - that is from the fluorescent tubes in my light table. And the reflections,) I don’t see the bleeding / smearing that are in your photos. 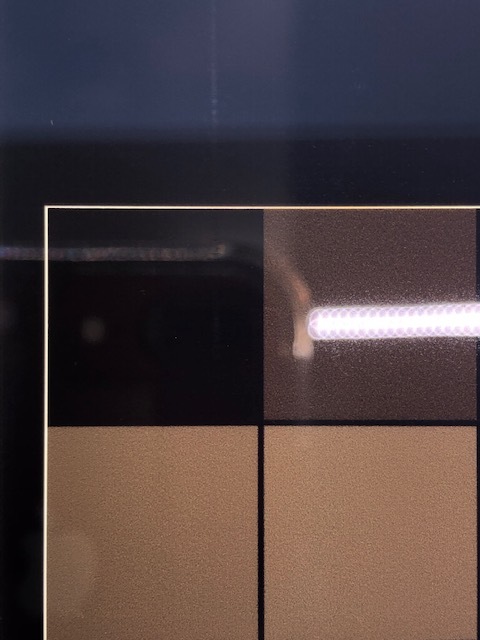 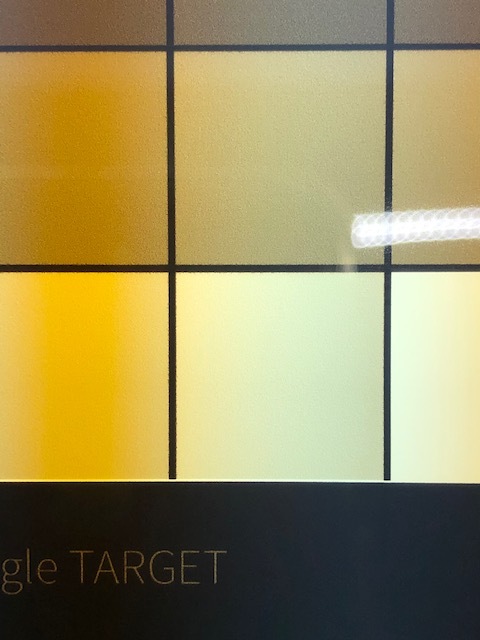 I also took a couple of photos with the film directly up against the camera lens on my iPhone to try to give you a sense of the difference in “opacity”. The Fixxons is clearer, i.e. not as milky as the ultra-premium OHP. My calipers couldn’t measure the thickness but the Fixxons is also slightly thinner then the Pictorico. The Fixxons packaging indicates which is the printed side and visually you can distinguished the matte (to be printed on) vs the shiny (not to be printed on) sides. 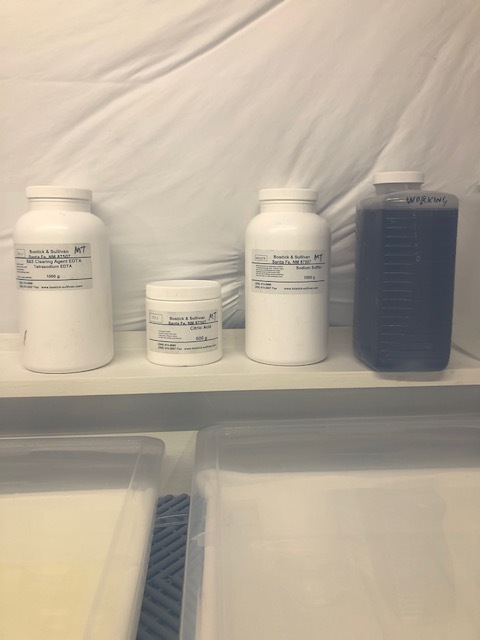 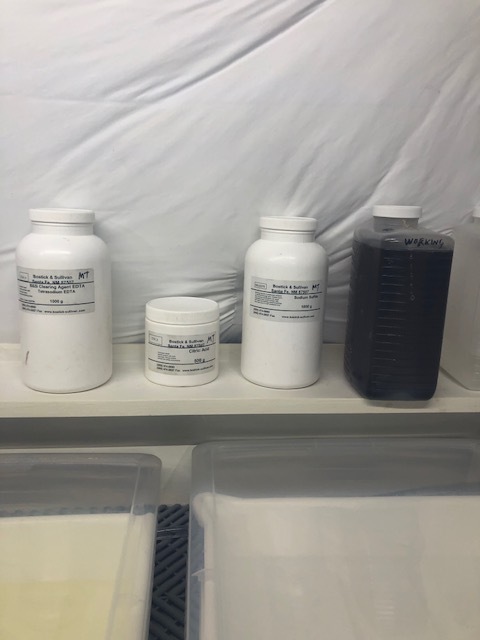 I would guess that the Fixxons will print faster than the Pictorico but I’ll have to test it.

It certainly would be worthwhile for you to get a sample pack and do your own testing so we can compare.

That’s good news. It also suggests that this is a relatively new product, since there was nothing by that name available when I requested my sample. Those neg details look very nice — which printer/ink combo is this?

To me, the difference in base densities is of minor significance. Exposure times are determined using the film being used. Others may require an adjustment but it won’t be much. The UV density of Pictorico Ultra (TPS) as measured on my X-rite 361T, which is the highest of any film I’ve tested, is ~0.15, or 1/2 stop. Pictorico Premium (TPU) is 0.10, or 1/3 stop, if I remember correctly. An old sample of InkPress film is 0.09; and The Fixxons Screen Positive film that I have is 0.07. In other words, the range of FB density among these films is only about 1/4 of a stop. If your exposure on Pictorico Ultra is 1000 units, then on Fixxons Screen Positive it would theoretically be 841 units. The Fixxons film that you have is probably a bit higher in FB due to the additional ink-load capacity, so the difference would be even less.

Personally though, I think I’ll stick with Pictorico since it has been a reliable product in my experience, which is something I can’t say about other films I have used in the past. And with the astronomical increase in the price of palladium over the last couple of years (which I was not aware of until a few days ago — thanks Jon!) it seems to me a risky way of trying to save a few bucks, but that is a calculation we all must do for ourselves based on our own particular ways of working. I can certainly see where using Fixxons film makes sense for folks who work in processes where the film is a significant fraction of the total cost of printing.

Fortunately for me, I’ve got enough palladium to last 2-3 more years, otherwise I’d have no choice but to be done with it! And since I seem to have solved my black spot problem by adopting the Malde-Ware chemistry I will hopefully be putting fewer prints into the reject box.

I’ll ask for a sample of this new Fixxons film and report back when I have hopefully verified your results.

Given the price of metal, paper, and chemistry I can understand why some folks may think I’m a little obsessed with the film we use to make negatives. But for some reason the price of Pictorico just bugs me, :-). Maybe perhaps since I have been making additional negatives when doing gum over Pd. I seem to be burning through Pictorico. Maybe other folks just starting out with alt. processes may be price conscious. Or maybe just having an additional source for film is a good thing.

Perhaps with the price of Pd. skyrocketing (the last I checked it was over $2200 per ounce) maybe we should sign up for the summer gravure workshop with Jon & Co. :-)!

Part of why we are focusing on Gravure (besides that it’s fun as all hell) is that it’s much cheaper per-print and is still a hand-made object on fine art uncoated paper.