I began with PiezoDN as a beta-tester couple months before the public release in 2016. I started out with the K6-Selenium inks in a 1430, and quickly was getting results way better than anything I had seen before with digital negs. Soon I swapped the Selenium inks for Carbon since that is my preferred tone for Piezo prints on paper, and found the Carbon to be just as good for negatives as Selenium in that printer.

Next, I set up one of my 3880s with K7-Carbon. (That printer is now setup for P2-K6.) Prints on paper were fabulous, but negatives had a grittiness in the denser end of the tonal scale (highlights on a print) that I had not seen before and couldn’t get rid of even after a year or more of trying various things that Walker and I thought could be the cause of the problem. I was leaning towards it just being a peculiarity of this particular 3880.

Until recently I thought I was alone in experiencing this particular problem. Last fall, there were a couple of threads in which it became clear that others using 38XX/P800 printers and Carbon inks had this same issue. Walker suggested the idea of swapping Selenium inks into the shade 2 and 3 positions since those are the inks the make up the bulk of the problematic part of the tonal range. (This is one of the few things I had not tried already.) I finally got inks and cartridges together and made the swap yesterday. The results are highly suggestive that the problem was caused by the Carbon inks, since after installing the Se shades 2 and 3 the problem is no longer there.

Here are pictures for your examination that show my results. Be sure to click them for a larger view, or download and examine them in Ps. I am including both the full targets and a detail of the top 4 rows. 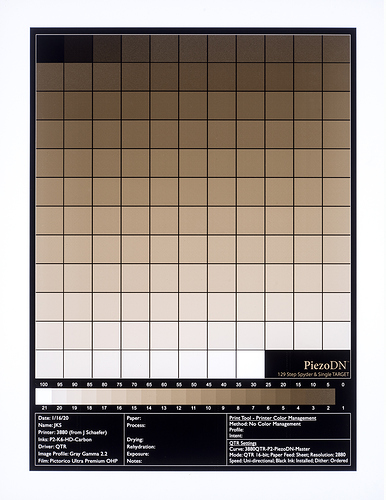 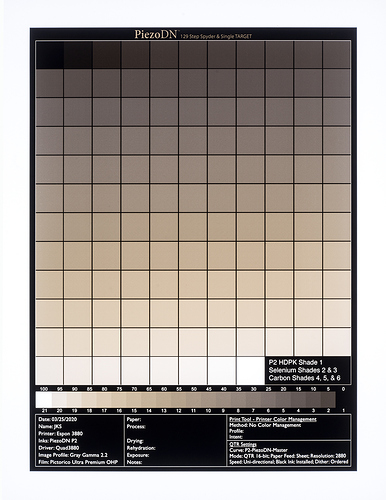 Maybe this will put to rest the cause of this particular issue. I suspect that a combination of minimum droplet size and maximum resolution is why I did not have this problem with the 1430.

I am very interested to hear from others using Carbon inks for PiezoDN. Please include the printer model you are using, and what your experiences have been, positive or negative. Pun intended.

Thanks and stay safe,
Keith

PS – Thanks to Walker Blackwell for sending me the Se inks to test, and thanks to Michael Trupiano for sending me some refillable 3880 carts to put it in.