Most of my images are very dark, so I don’t usually see problems in printing negatives as the negatives have very little black. Now, printing some lighter image negatives for a friend, I see the same problem he had. Black areas on the negatives how faint horizontal lines approx. 1.5 mm apart. We were trying to print negatives for Carbon Transfer and for salted paper. Cyanotype negs are less affected, though the lines will show up if a black border is printed on the negative. He has a 4900 and I a 3800. Both of us use the requisite Pictorico Ultra Premium OHP. Printing a straight (non-DN) image on Epson UPPM shows no lines in blacks on my printer.

Regarding nozzle checks, mine was fine both before and after I printed the negative. Power cleanings have made no difference.

I just printed with the exact same settings, (a DN Carbon printed through Manual Rear) but printed using Epson UPPM Paper instead of Pictorio. Gorgeous Blacks–no lines, even looking with a loupe.

Any advice? I was about ready to throw up my hands and buy a second p800 for Piezography inks but I just proved, I think, that the printer is very capable of responding to the driver when printing black ink.

Looking forward to hearing back from anyone, as I am eager to proceed with making more negatives.

Please post your full setup(s) and the quads you are using. I close-up picture of one of the problematic negs might also be useful.

Sure. Here—
Printer 3800
Ink Set K6
Quad: I call mine Carbon, remap, or Cyano remap
I printed the Cyanotype from a PC and Quad RIP
I printed the Carbon from a Mac, Print tool, and Quad
(For some weird reason I can’t print the Cyanotype curve from my MAC. I finally gave up trying, despite much help here.)
Print Tool. I use these settings. I also tried with “No color managed” with same problem.

I will try for a pic of the negs and nozzle.

I know the Pictorico is picky. If I stay with doing cyanotypes and gum prints I’d be content with the negs, but Carbon Transfer Printing demands perfection in the negs.

Also disregard “invert and flip” in above screen shot. 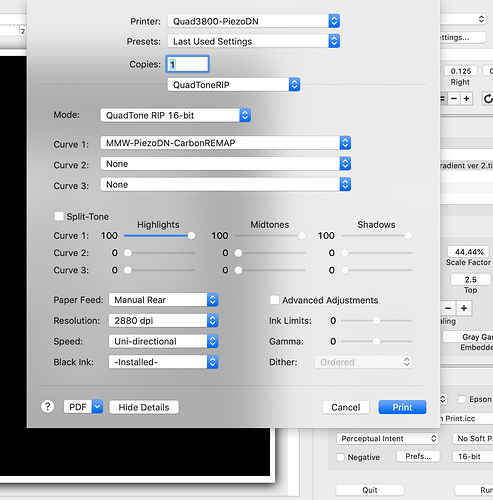 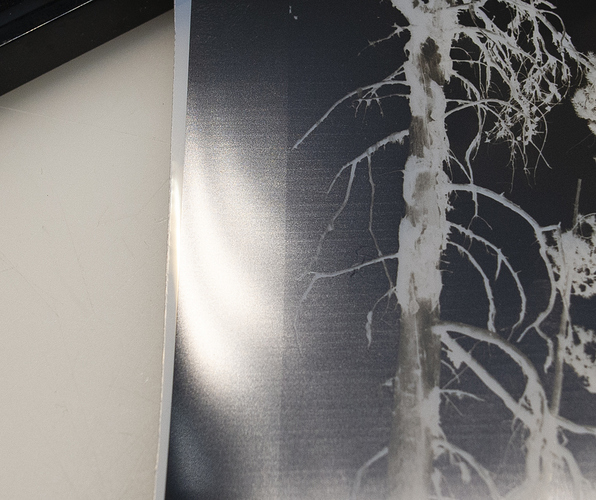 I directed a light on to the neg to get these lines to show up. In reality the neg is that you see in the picture is mostly black. On the actual neg lines are only in the black/nearly black areas. 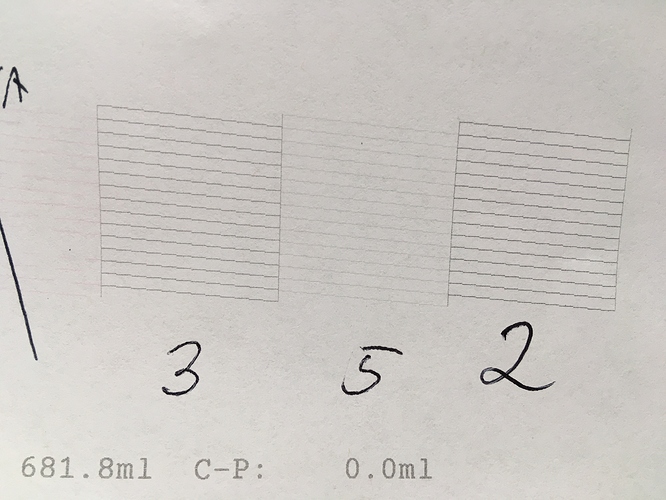 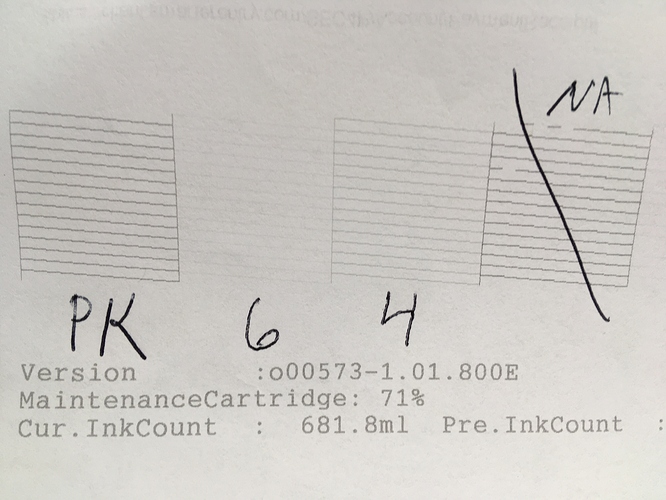 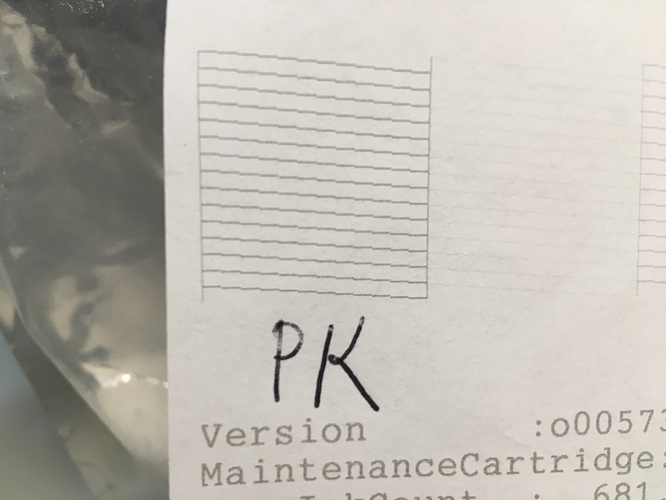 And my nozzle check.

Unless the channel marked NA (which I’m guessing is MK) is actually PK, and PK is actually MK (I don’t really suspect this to be the case – that would be too easy), I don’t see anything here that would cause that banding. But I do have a couple of questions:

That you are getting similar results on different systems and different printers seems to suggest that the problem lies elsewhere. Have you made negs with other quads that do not have this problem?

It looks like this is somehow printing 720dpi. Did it seem really really fast to print the film? I think you need to re-install quadtoneRIP and delete the printer and also re-install the curve and try a small test print on a bit of film to see if it’s too fast.

No, It takes forever! Like it always has. I can reinstall etc. but can’t today. What is it that clues you to it printing 720 dpi?

Not a clear answer to your question. Yes, I can install the curve, including seeing it in finder and in the drop down. If I try to print, a print comes out but there is no management. In other words for example, it won’t print a negative if I select a DN curve. The Carbon curve functions fine, however.

Good morning.
I’m curious what you saw that made you think it was only printing at 720 dpi.
Additional info to share before I uninstall/reinstall Quadtone is that I can create the problem lines from 2 different computers, so unless both Quadtone RIPs are only printing at 720, I don’t think that would be the direction to pursue, for this particular problem.

However, in the past, I did uninstall/reinstall to try to fix the “permission” issue with my curve files that Quadtone RIP won’t recognize. Didn’t totally work, hence I print some .quad from a PC, though I really do like to use Print Tool.

Here is the carbon curve. The Quadtone RIP appears to use it (unlike the cyanotype curve that won’t work on my MAC)

I hope you looking at it can find the “one weird thing”!

Sorry I couldn’t get back to you over the weekend. Life get’s busy, and, no, it was not the Super Bowl that did it.

I’m curious what you saw that made you think it was only printing at 720 dpi.

The lines made me think this. I’ve seen that bug before.

I will test the problem quad. It may be that you need to simply name it with less characters.

Could this be the problem, or part of it? 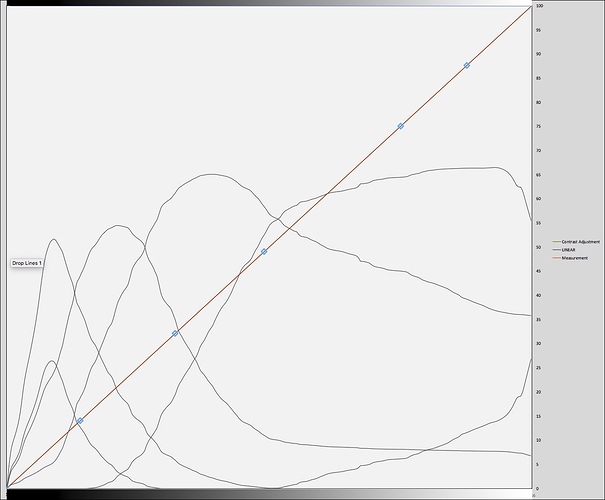 Getting in over my head. … Curves too bumpy? Or something else?

Interesting…The cyanotype one that won’t work on a Mac, was one that you renamed when I was in Vermont, and then I added some more Characters to the name!

Yes. It’s something that has been glossed over (if addressed at all) in the manual and other instructions, but it did come up in another thread a couple weeks or so ago, and Walker said to make a new curve from it with channel curve smoothing set to 100%, then save the new curve and see if that eliminates the problem.

This is if you are using the PPEv2 tools which has that feature. If you are using the original Smoother tool, your only option would be to go back to the starting curve and linearization data and make a new CGATS file with higher data smoothing.

Personally, I think the tendency of most people is to be overly conservative with smoothing, which results in measurement irregularities getting baked in to a new curve. It gets worse the more iterations you do because the problem becomes compounded.

My own experience with the importance of data smoothing with PiezoDN for the last 4 years and other mostly QTR-based methods prior, is that it’s hard to do too much smoothing, and that the more data points being used (more steps in the target) the more critical it becomes.

I do agree with Walker though that what you are seeing looks very much like what printing a negative as 720dpi rather than 2880dpi would produce.

In case you don’t have PPE2, here’s a smoothed version of your curve:
MMW-PiezoDN-CarbonREMAPsmooth.quad (8.3 KB)

PS - Quad names can have up to 40 characters excluding the extension. I ran into this issue long ago and tested it.

Wow, you are so awesome! I’ll give the curve a try, but it might take a few days. More importantly I’ll send it back to be used on the computer where we originally discovered the problem. Thanks so much!

Regarding the 720 dpi, it’s so strange since I know of 3 different Quadtone RIP (2different Macs, and one PC) that print identical problem lines in the deepest blacks.
Can you tell me what it is that you are seeing? Something on the photo of my neg, or something on the photo of my nozzle check? The photo of the lines on the neg was hard to take, and I had to get a light glare to hit it just right to even make them show.

(I’ve had some success with cameraless photography—maybe I should stick with that!)

If you take an image and print it on paper at 360 or 720dpi (I’m referring to printer resolution, not image resolution) you will probably see something similar to the problem you are getting on film. Film is much more sensitive to banding than paper.

In your original post you mentioned printing this image on Epson UPPM paper with no problem. Try that again, but change the print resolution to 720dpi in the QTR setup and you may see some banding.

I don’t think that is the problem here though, since you said are getting a similar result with this image on different printers and I presume on other images as well.

I suspect that the lines are actually present in more than just the dense parts of the negative, due to the wobbly ink lines throughout all but the left most part of the graph above. It just becomes less visible as you go from more to less tonal density.

Try the smoothed curve that I sent. It will either confirm or deny this hypothesis.

Thanks for clarifying what was bringing you and Walker to the conclusion that the problem was related to printing at 720 dpi. Over all the printed negative doesn’t look like a low res print, and like usual, takes forever to print. (I know what banding looks like on my, now dead, r3000 if I use draft mode. )

I am eager to have time to reload the new curve and print. I’ll report back hopefully by Tuesday—if not, then Thursday. Again, thank you a million times over for your interest and time.